September 04, 2018
Four roundels and six hearts: the decoration on an old Breton folding spoon, discovered in detail as I traced the outlines of the patterns for a future book about the decoration of these lovely old spoons.

This spoon is in the reserves of the Museum at Nantes.

Nantes, at the mouth of the Loire river used to be the chief city of the Duchy of Brittany until 1532, when Brittany and Kingdom of France were united. Nantes and the surrounding département, the Loire-Atlantique were part of the Région of Brittany until after the second World War, when they were split off to form part of a new Région called Pays de la Loire. This was not a popular move at the time and still remains contentious. Most inhabitants of Nantes consider themselves to be breton to this day. 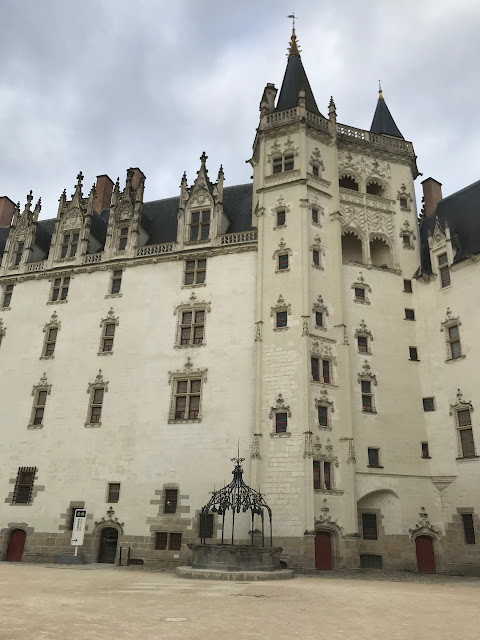 So back to the Museum at Nantes. The Musée d'histoire de Nantes is to be found within the Château des ducs de Bretagne, which is a building that is every bit as impressive as it sounds, and well worth a visit in itself.

Having photographed this spoon amongst all the others in their reserve collection, I really had not noticed quite how lovely it was, and how original some of the patterns were. It was only as I studied it in much more detail to document the shape and the patterns that it sprang out at me and I decided to try to make a version of it for myself.

It is fairly apparent that the original spoon, carved from box, would have had a coloured wax inlay. The spoon comes originally from the Pays de Cornouailles in the far west of Brittany - it has the characteristic flat, broad handle and short hinge of that area. All the spoons of this style from this area have coloured wax inlay, but this case it has come out and there is no trace of colour remaining on the spoon. I have a theory that dropping an inlaid spoon into hot soup would ruin both the the inlay and the soup, but I haven't tested that theory yet.  In addition, the quality of the chip carving is not good enough to have been left unfilled.

My drawing of the decoration shows clearly the four roundels on the handle, separated by the three pairs of hearts in teardrop outlines. The handle itself is shaped around these motifs, making a scalloped outline that would not have been uncomfortable to hold.

What I find interesting are the individual motifs within the roundels. Working up from the handle end: the first has a cross formed from interleaved chevrons within a double ring of triangles. The second roundel has an outer ring of radially-oriented short lines that look to have been cut with a small V-gouge - the cuts tend to get wider from one end to the other. Inside this is a ring of interlocking chevrons with triangles, surrounding a simple ring of triangles. The third and fourth roundels each go back to the double outer rings of triangles as in the first roundel. However, inside number 3 is a 12-pointed starburst and number 4 has a cross of 3 horizontal and 3 vertical lines. Again, most of these look as if they were cut using a V-gouge.  These linear-style patterns are relatively rare in this style of spoon and I am tempted to think they are a result of this craftsman's ownership of a nice, sharp, narrow-angled V-gouge.

There are a few old spoons with this type of decoration, three or four roundels down the handle. The three closest are all in the Musée départemental Breton at Quimper:

The top one (Quimper 1954.605) has three roundels, without the handle being shaped around them. It does have small hearts separating the roundels, and these are inlaid with pewter instead of wax. The lower spoon has four roundels, the top one of which has been outlined in the shape of the handle. The patterns are all predominantly linear in style, and all appear to have  been cut using a v-gouge. The biggest difference between these spoons and the one drawn above is the orientation of the hinge. In the two spoons above the hinge mortise is on the bowl, whereas the mortise on the top spoon is on the handle, which is a much less common configuration.

This spoon (Quimper 1954.627) is much closer to the first spoon above. It has the mortise on the handle, a similar shape with several decorative motifs in common. The roundels are less finely-detailed than the first spoon, but there is some shaping of the handle around the circles. The cross-hatching and double rows of triangles on the hinge are also broadly the same as the first spoon. Perhaps this spoon was made by the same craftsman, or in the same workshop as the first one?

So here's my interpretation of this lovely spoon, also carved from box wood: 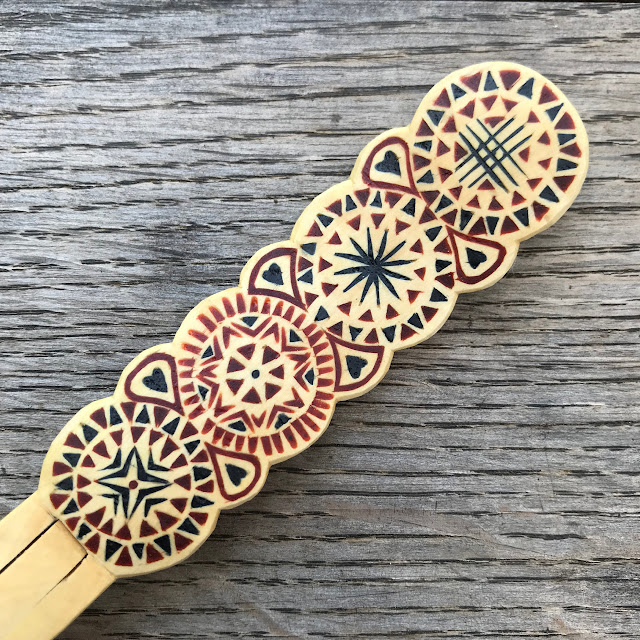 I have inlaid it with red and blue wax in a typical style of arranging the colours. It's a pattern that I really like and I shall be making more in the future, with some variations of my own!

Popular posts from this blog 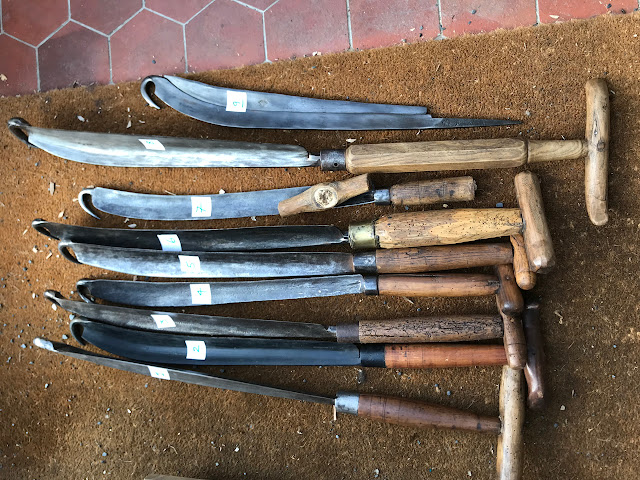 These tools were part of a collection and are all in beautiful condition, with no rust at all. Some are almost unused. The man selling them wanted them to go to people who will use them. They all need a good sharpening, and most need the handles replacing as many have woodworm and some are broken. They will normally be shipped with the handles removed (I can omit the handle completely if you want, and include photographs for reference for making replacements). All have ferrules. I think the prices I am asking are fair. Yes you can get them cheaper on french internet sites, but I’ve never seen them in such good condition, and you’ll have difficulty getting them shipped!! This gives me a small profit for my time and hassle and covers my expenses (packaging and Paypal). Shipping Shipping will be by French Parcel post, which is the least expensive option I can find. Shipping prices are for tracked parcels. For UK buyers, I can post in the UK which is marginally cheaper, but sadly
Read more 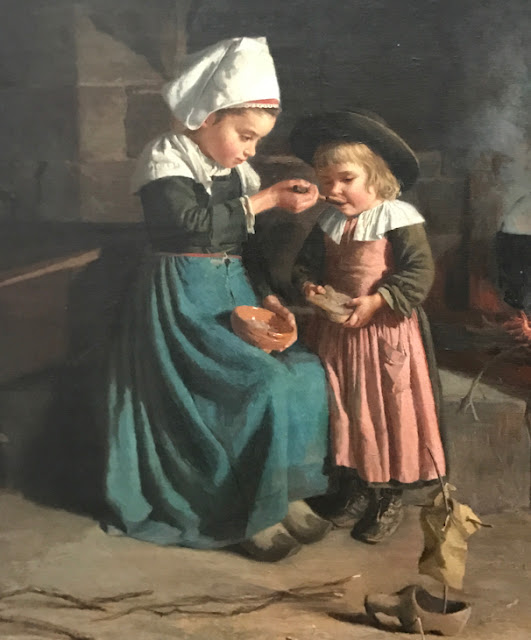 In the breton countryside nearly everyone had a wooden spoon and perhaps a knife to eat their simple diet of soup, pottage, vegetables and stew - a spoon was often a peasant’s only personal possession.  These everyday spoons were kept in a porte-cuillères, (Breton: parheiler, English: spoon rack) that was usually hung from the ceiling or stood on a table. This photo is of a plain porte-cuillère  in my collection, with the spoons it came with, from a cottage in the village of Guerlesquin in Finistère. Porte-cuillères were a practical storage method to keep spoons dry, aired and relatively clean in a small cottage. At the end of a meal each person would lick their spoon clean, perhaps even wipe it on a sleeve and then replace it in the porte-cuillères, which could often then be raised up out of the way by means of a counter weighted pulley. In this way it was possible to allow the spoon to air dry - avoiding the development of mold. It also, in theory, prevented mice and other
Read more

janemick
I make wooden spoons, and because I live in Brittany, NW France, I make them in the style of the traditional decorated Breton spoons from the 18th and 19th century.